When it comes to former Soviet Republics, Armenia has long dominated L.A.’s culinary conversation. That makes sense given that an estimated 500,000 to 1 million Armenians live in Southern California, compared to countries like Lithuania or Ukraine, which have far smaller populations in the area. Occasionally, cuisines from other now-free nations pop up, including Tbilisi Deli in Encino and Uzbekistan restaurant in Hollywood, both of which are now closed.

In Glendale, L.A.’s beating heart of Armenian cuisine, Georgian food is becoming more fashionable. The former Soviet Republic (until 1991) borders the Black Sea, with Russia to the north and Turkey, Armenia, and Azerbaijan to the south. The country has grown in popularity as a tourist destination due to  its scenic beauty and hearty comfort food. Although the dumpling- and skewer-focused Khinkali House opened first, nearby Havlabar may have constructed the deepest Georgian menu that Angelenos have seen.

Owner Gohar Muradyan is a longtime teacher at Pasadena Unified School District. She still teaches, and visits the restaurant after the school bell rings and on weekends. Her husband, Kevin, has been in the restaurant business for most of his life, first in Yerevan, Armenia, then in Moscow, and locally for the past two decades at restaurants like Mandaloun, Maran, and Old Gyumri. The couple also runs Dream Palace Banquet Hall in Glendale. She opened Havlabar in June, sandwiching the restaurant between a 24-hour doughnut shop and a nail salon in a corner strip mall near Glendale High School.

The Muradyans both grew up (and met) in Yerevan. They took frequent vacations to Georgia and now celebrate their favorite Georgian dishes at Havlabar. The restaurant’s name refers to Avlabari, an old neighborhood in Tbilisi—Georgia’s capital—that has a large Armenian population.

They list chikmeruli as Cornish hen on the menu, but actually serve a chicken’s leg quarter, simmered to peak tenderness in creamy, piquant garlic sauce on a clay plate and sheathed in crispy, herb-slathered skin. 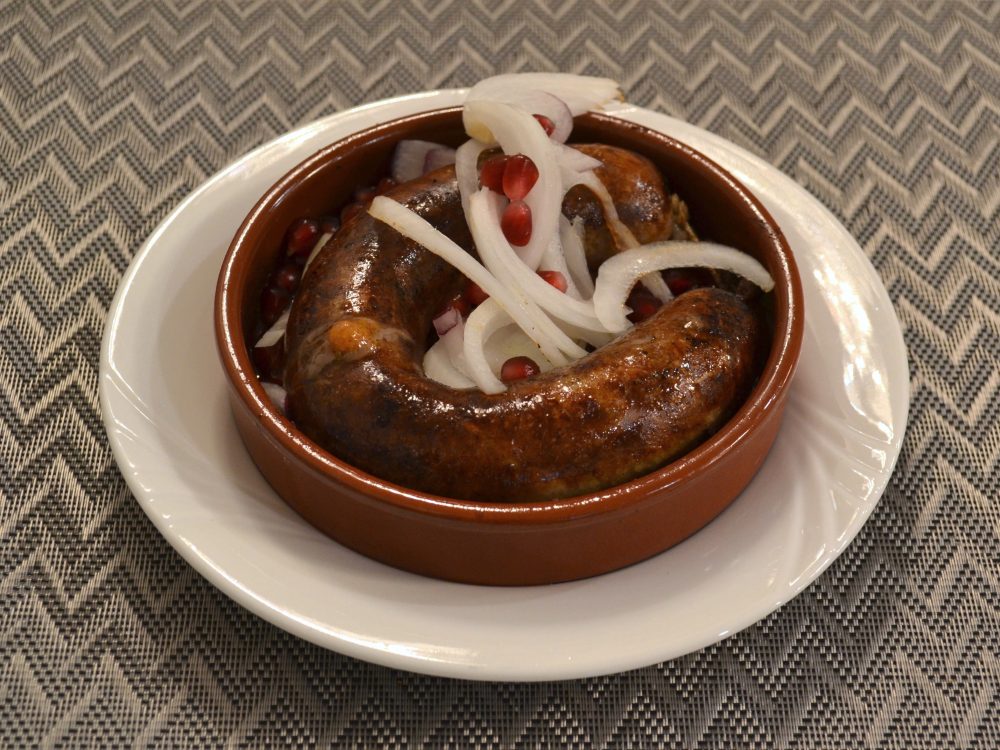 They even found ways to enliven sausage. Kupaty is house-made Georgian-style pork sausage crafted with garlic, spices, and currants, stuffed into a natural casing and served in a sizzling clay vessel with raw shaved onions and tart pomegranate seeds. The soft link sausage is so juicy that it spurts upon being sliced. Sop up the juice with more of the house bread.

Khachapuri is by far Georgia’s most mainstream dish, and one that’s readily available in L.A. People frequently describe khachapuri a boat-shaped Georgian flatbread, and that’s mainly the case at local Armenian bakeries. However, Havlabar delivers new shapes and forms. Imeruli is a round flatbread filled with sulguni, a Georgian cow’s milk cheese similar to mozzarella. Megruli khachapuri raises the stakes by filling and topping each dish with molten sulguni. “Khachapuri on grill” is perhaps their most unique version, featuring a crispy, and flaky pastry coiled with stretchy, pull-apart sulguni.

Yes, the menu also features khinkali, substantial pork and beef dumplings available either boiled or fried. They may be great, but the menu’s less common Georgian dishes hold more interest. Considering Havlabar offers a Georgian menu with unprecedented depth, curious Angelenos might as well dive into the deep end while they can.

RELATED: The Best Northern Thai Food in America? Head to a Club in Thai Town

As Protests Rage in Chile, These Patchwork Pictures Are More Relevant...