Home Business At 80, Judy Chicago Is Claiming Her Rightful Place in L.A. Art...

There were five dozen openings in L.A. last weekend, but chances are Judy Chicago’s dominated your feed. At a completely mobbed-out Jeffrey Deitch gallery, where a collection of her early sculptural works are on display, the octogenarian feminist artist enjoyed a moment that seemed to rival her breakout four decades ago, when her seminal installation, The Dinner Party, caused SF MOMA to make its first foray into timed ticketing. (It will return to that museum for an encore next year.)

“Revenues from admissions were such that the gift shop acquired a new cash register, nicknaming it Judy,’” writes critic and author Sarah Thornton, who was also in attendance this weekend, in the foreword for the artist’s monograph. But, as Thornton goes on to explain, bad reviews from male critics and the disdain of the largely male art establishment has resulted in the The Dinner Party being “almost entirely omitted” from postwar art history—ironic considering “one of the key themes of Chicago’s work is the erasure of women’s achievements from the historical record.” 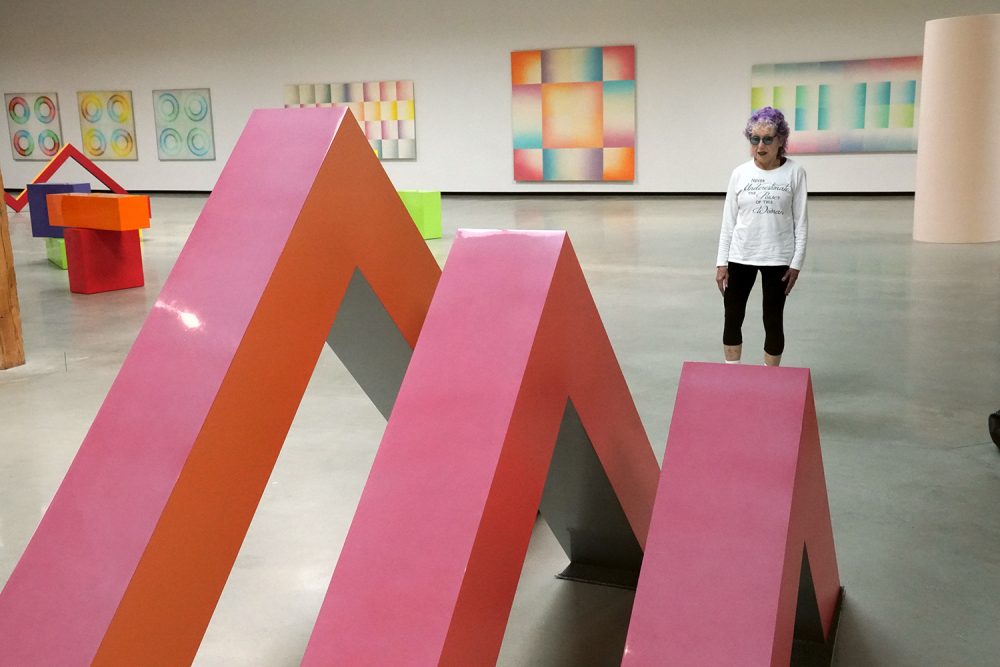 Though her assumed name is a nod to her Windy City roots, Judy Chicago forged an early career in L.A., a lone woman among a cadre of macho male contemporaries like Billy Al Bengston, Chuck Arnoldi, and Laddie John. It was Bengston, a professor at UCLA while she was in grad school, who taught her that “being an artist is a full time job” while the latter two helped her stage her iconic colored smoke Fireworks performances around the city. In fact, her name is based on a sobriquet given to her by her first L.A. dealer, Rolf Nelson.

“As tough as it was in L.A., I still feel like my roots as an artist are here and the spirit of self invention of those guys in L.A., that’s what really influenced me,” Chicago says a few days before the opening as she leads me around her homecoming survey, Judy Chicago: Los Angeles, her signature purple locks and blue-lensed glasses rivaling the colors in her sculptures. While the exhibition is meant to be a comprehensive look at this extremely fertile period in Chicago’s career it’s also a time for the artist to reflect on the fact that, as she recalls, “L.A. was very inhospitable to women” in the art world half a century ago.

As a point of reference, Chicago walks me over to her landmark minimalist sculpture Rainbow Pickett (1965), a series of ascending plank sculptures that form a growing gradient of hypotenuses along the southern wall of the gallery.

“When I did this in my Pasadena studio [the late Ferus Gallery founder and director of the Pasadena Art Museum] Walter Hopps would do visits and I, of course, was the only woman. When he came to my studio he refused to look at it,” says Chicago, who now does a talk titled “Rainbow Pickett Broke My Heart” and wrote about the exchange in her first book, Through the Flower, which is also the name of the feminist arts organization she founded in 1978. Originally created to help realize her landmark installation, The Dinner Party, the foundation is now a research center in Belen, New Mexico, where Chicago has lived since the ‘90s.

“Years later I had lunch with [Walter] in Washington, D.C. and he said, ‘Judy, I know you hated me.’ I said, ‘Well, you broke my heart.’ But he said, ‘You have to understand, in the ‘60s in L.A. women were either groupies or artists’ wives, so what was I to make of the fact that you were making work that was stronger than the men’s? It was as if I saw a women pull up her skirt and roll down her stockings. I had to avert my eyes,’” Chicago recalls. “He expected me to say, ‘Oh, Walter, it’s all right. You’re a gentleman. You’re not staring at my thighs.’ It was really tough.”

So tough, in fact, that despite its inclusion in the Jewish Museum’s seminal survey of minimalism, Primary Structures, the work went into storage along with so many other examples of Chicago’s early work, much of which was trashed because she couldn’t sell or afford to store it. Unlike her male contemporaries, Chicago was also demonized for the content and color of her work. 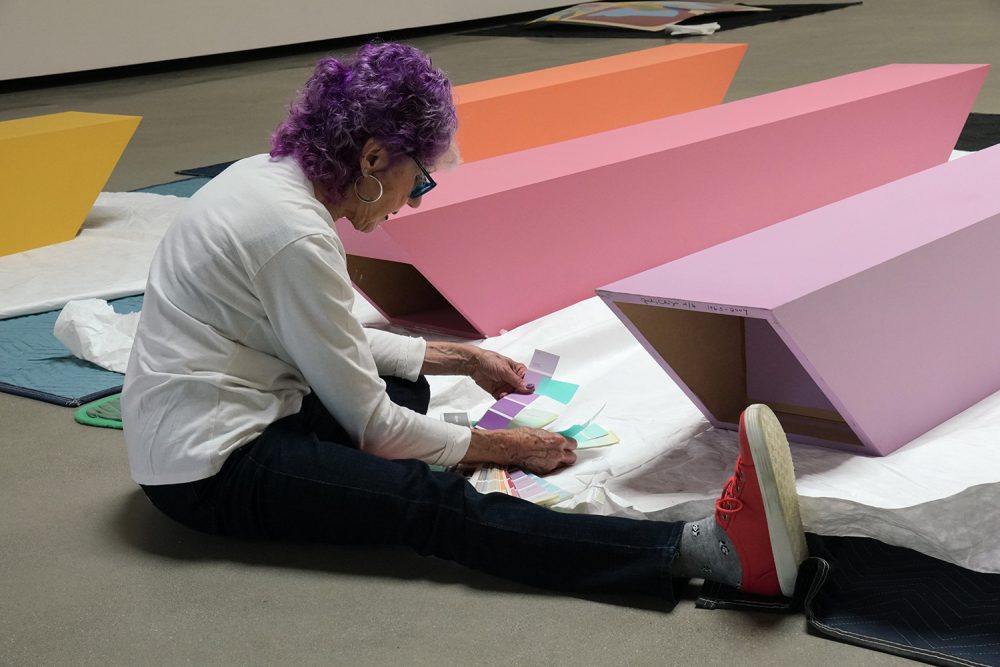 “My color, my imagery, that’s what got me into so much trouble at UCLA,” Chicago adds, pointing to a trio of 1965 car hood paintings—Bigamy Hood, Birth Hood, and Flight Hood—which hover like futuristic totems of girl power between Rainbow Pickett and a half dozen of her sprayed acrylic and mirror Domes. A testament to Chicago’s technical and conceptual rigor, they also stand as luminous, lacquered examples of double standards that persisted in an art world that praised male L.A. artists who embraced industrial techniques while female artists attempting to do the same were marginalized. Chicago, it so happens, learned to spray paint at an auto body school where she was the only female of 200 enrollees.

As we make our way through the gallery, Chicago’s husband, the photographer Donald Woodman, informs her that two of the blue aluminum rectangles in her 1965 installation, Rearrangeble Rainbow Blocks, never made it to the gallery. It’s an uncanny moment, but one that allowed us to assess the landscape of the show, which explores the development of Chicago’s complex color systems, designed to convey emotional states, feminist formalist tropes, and amplify her use of uncommon materials (including auto lacquer, plastics, and smoke) between 1965 and 1972.

“It’s about color, spraying, moving back and forth between two and three dimensions, fringe materials, plastics, fireworks,” Chicago says of the Deitch installation. The six Domes at the southeastern corner of the gallery serve as a foil to a trio of Pasadena Lifesavers, sprayed lacquer orifices referencing multi-orgasmic sex on clear acrylic panels. “Mark di Suvero had a studio next to me in Pasadena and I was talking about the orgasmic capacity of color in the Lifesavers and he said, ‘Judy, I could look at those all day and I’d never think about that,’” Chicago says with a laugh. A pair of 1971 soft op art Flesh Fan paintings are now market darlings, but Chicago says, “When I made these paintings, it was complete silence.”

Her never-exhibited plywood sculpture Ziggurat, remade with Deitch’s help from a black-and-white photo of her Pasadena studio, serves as a counterpoint to monumental geometric installations like Sunset Squares and 10 Part Cylinders, which appeared in LACMA’s American Sculpture of the Sixties survey and which Chicago made from fiberglass after a stint at boat-building school (she also had to remake it for the Deitch show). Meanwhile, the back wall of the gallery has been covered with a Turneresque gradient horizon wallpaper hung with reference photos of Chicago’s early smoke performances executed in Palm Desert, Santa Barbara, and atop a bridge in Fullerton.

“For a long time nobody knew anything about that work until Pacific Standard Time. Before that I was being written out of L.A. art history,” says Chicago, who lit road flares around igloo-like ziggurats for the kick-off performance at the 2012 edition of the Getty’s citywide triennial. When I asked if she planned to make a new smoke piece during her L.A. show, her eyes lit up behind her blue lenses and she flashed a toothy grin. “Can you imagine what’s involved in doing this now? Jeffrey said they would have to evacuate the entire town.”

The post At 80, Judy Chicago Is Claiming Her Rightful Place in L.A. Art History appeared first on Los Angeles Magazine.

Coastal Counties Could See a Lot More Growth Under a New...

When Should You Book Your Year-End Holiday Travel Plans?

Six Tips for Cultivating Cannabis on a Terrace or Balcony