Just as guests began arriving at The Bell: A Taco Bell Hotel & Resort on Thursday, a viral tweet made the rounds connecting the fast food chain to conservative-leaning political contributions made by its corporate parent, YUM! Brands. Would that cast a cloud over the pop-up activation, which had been in the works for over a year? Would the flood of Instagram influencers, YouTube vloggers, and Taco Bell enthusiasts be less likely to gleefully share their Fire Sauce-smothered content? The answer, of course, was no.

People really, really love Taco Bell. Every reservation for The Bell’s four-night run ($169 per night) booked up in under two minutes.

Once checked in, the opportunities to immerse in the “lifestyle” are everywhere. At the preview, all guests were issued logo-printed tote bags stuffed with beach towels designed to look like hot sauce packets, but a gift shop offers dozens of other pieces of branded merch: purple top-and-shorts outfits emblazoned with cartoon tacos, colorful bikinis, mirrored sunglasses to block out the sizzling desert sun.

Once suitably stocked up on merchandise, guests head to their rooms. The attention to detail in the hotel take-over extends to the smallest details in the room–even the tiny hotel soaps and shampoos are wrapped in The Bell branding. Beds are made up with special blankets and topped with fuzzy orange pillows in the shape, once again, of hot sauce packets. Hot sauce is very popular here. 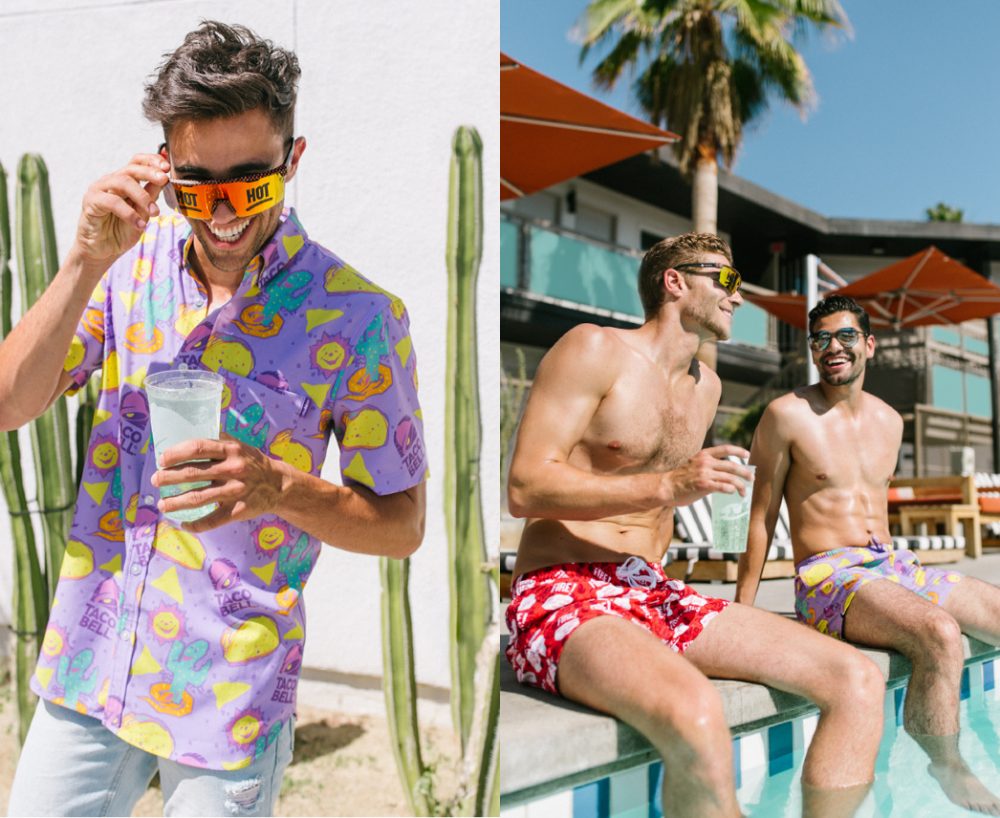 But it’s out at the pool, specifically the Fire Pool, where the magic truly happens. In the pool, large red floats–naturally, in the shape of hot sauce packets–contrast with blue water. There’s an upbeat, pool party vibe (it is perhaps not a coincidence that The Bell chose to take place on the same weekend as dance music and pool party festival Splash House also hits Palm Springs). Many, many Instagrams are staged. Jeffree Star casually walks by.

The Fire Pool area is also home to the Baja Bar, the primary source of the thing which has drawn these Taco Bell super-fans together (other, that is, than the simple pleasures of indulging in a flamboyant display of late capitalism): the food. A special menu of hotel-exclusive dishes is on offer, all created by Taco Bell executive chef Rene Pisciotti, a man history will likely remember as the inventor of Nacho Fries. Among dishes are a roasted veggie wrap, jalapeño popcorn chicken, and several salads. None of these items is exactly available in your local Taco Bell, though the popcorn chicken is very similar to a chicken dish available at the upscale Taco Bell Cantina locations, such as the one in Newport Beach. 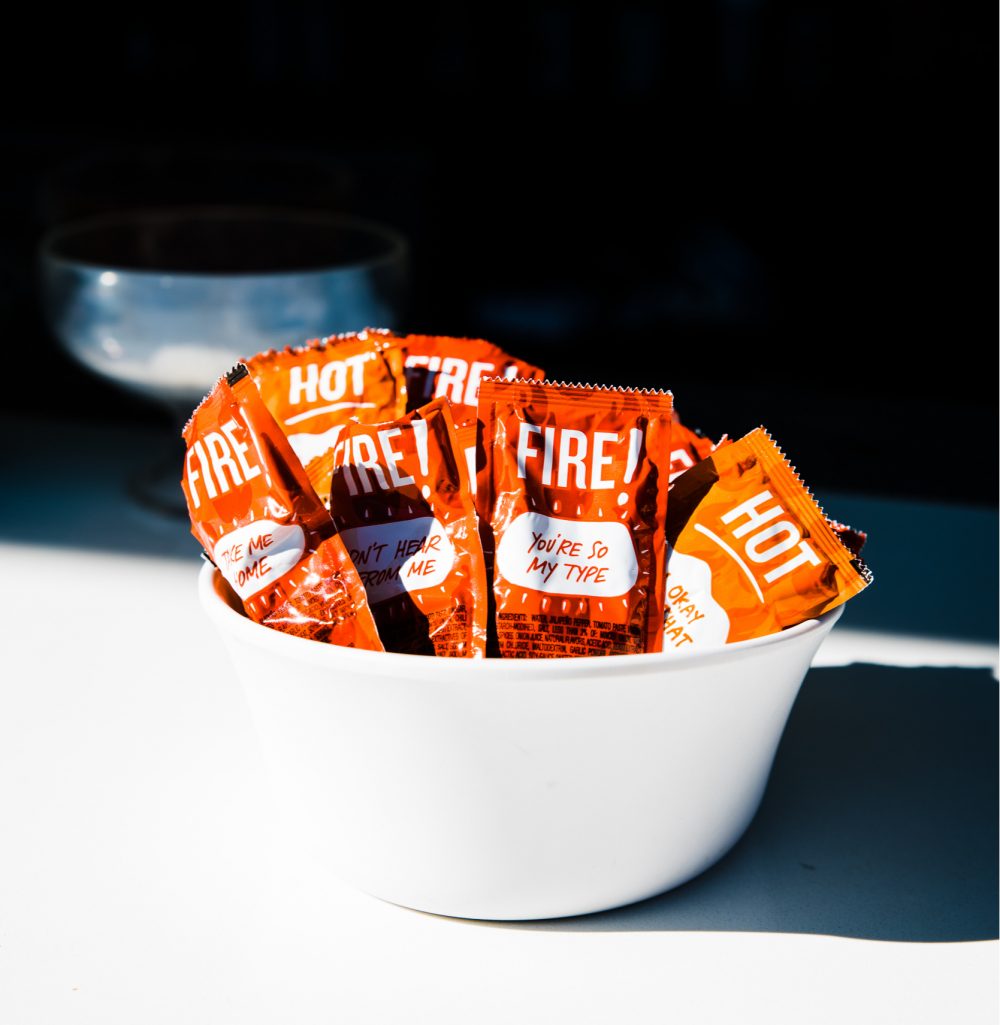 Pisciotti took inspiration from the kind of dishes one would classically expect to eat poolside or from a room service delivery, but with a touch of Taco Bell flair. There’s a platter of crudité and hummus served with grilled gordita bread, rather than pita. A play on the traditional club sandwich includes fried chicken breast, bacon, Swiss cheese, tomato, and avocado, held between layers of Toasted Cheddar Chalupa shell. The Toasted Cheddar Chalupa, test marketed last year in Michigan, will soon roll out to locations nationwide.

Baja Blast, a Mountain Dew soda flavor exclusive to Taco Bell, is the object of a level of cultish devotion second only to Fire Sauce packets. It was, someone tells me, “chemically formulated to taste good with Taco Bell food.” There are Hibiscus-decorated spritzes, Champagne and Baja Blast cocktails served with fresh fruit popsicles, and in special celebration of the 15th anniversary of the product, a Birthday Freeze slushie available only in the hotel’s crinkly-silver-walled Freeze Lounge. (The Freeze Lounge is actually quite warm; everyone is really sweet and apologetic about it.)

Elsewhere on the property, a salon is performing Taco Bell inspired manicures and shaving the company’s logo into hair. The Aqualillies perform a synchronized swimming routine decked out in Fire Sauce suits. After sunset, live bands perform and poolside movies play to keep the crowd entertained, as servers circulate, passing trays of snacks and more conventional Taco Bell menu items, like Cruchwraps and Chalupas.

At 7:00 A.M., there is yoga, followed by breakfast service. Ordering room service seems to be the popular move, though the in-room breakfast menu is limited to two dishes: Pancake Delights (a sort of doughnut-like orb, filled with icing, far tastier than I anticipated) and a build-your-own breakfast taco kit featuring eggs, cheese, and a variety of accoutrements. Expanded breakfast options available to order from the Baja Bar include Fire! Chip Chilaquiles, an avocado tostada with puffed sorghum and radish, and cornmeal pancakes with meyer lemon lechera, pistachio, and fresh strawberries. The breakfast burrito is particularly good. We are in Palm Springs, so there is also a date shake, made here with horchata and Greek yogurt.

Unlike other pop-ups, The Bell isn’t really about launching any specific product or tying into a discernible campaign. Rather it exists just to be a “sharable moment”–shared both by the social media content creators, and a small group of guests for whom Taco Bell holds a special emotional significance.

One woman in attendance has worked in Taco Bell locations in Houston, Texas for over 20 years, working up to city manager for the chain, and was invited to attend the event by the company in recognition of her years of loyal service. She seemed slightly baffled by everything she was seeing, but amused to roll with the experience. As I went to check out, I spotted her again, posing for a cell phone photo next to Jeffree Star’s yellow Lamborghini.

The Head of L.A.’s Top Homeless Services Agency Is Stepping Down

The Best Things We Saw at Adult Swim Festival 2019