Facebook
Twitter
Google+
Pinterest
WhatsApp
Taking a job in the heart of the city sometimes means alternate methods of commuting if punctuality is to be maintained. The daily commute took me an average of 60 minutes to get to work from my home; Even though Google maps GPS quoted me 28 minutes. I easily let this slide as listening to my positive upbeat music while stalling out wasn’t too big of an issue. This ease of mind faded within the first week as shitty drivers and backed up traffic made for a monotonous stop and go slow death- I had to find a different approach. Portland is one of the most public transit, cyclist and pedestrian friendly cities I’ve ever stepped foot in. The answer dawned on me- I would begin riding mass transit. 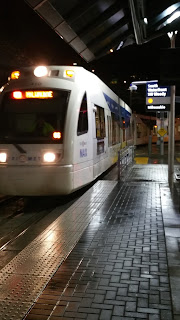 This was the best solution to the never ending sadist ritual known as the morning commute. I eagerly collected the daily fee of riding Trimet in the Portland Metro area, five dollars. 5 dollars gives an all day, all zone ticket, basically a stress-free ride to anywhere Portland. Traveling from Oregon City to downtown Portland takes a bit longer than traffic due to all of the stops. I added an average 30 minutes to my daily commute each way.  This may seem like an eternity to some on the 9-5 grind, but really being hands-free gave me availability. Suddenly my multi-job efficiency experienced an uptick- not unlike a morning worker before and after caffeine.

I am a people watching experience hound. I love to absorb the world around me in the form of observation rather than conversation. I am by no means and introvert- but people really do bug me. The five-minute friend thing became obsolete with the rise of technology, so holding a conversation with random strangers is difficult anyway with attentions redirecting to phone screens every few moments. Ah, humanity- so much is bypassed in life. Missing reality while living vicariously through YouTube videos and Facebook feeds of seemingly more interesting lives.

Riding public transit is an experience unlike any other. In Portland where people strive to “Keep it Weird” a few pointers should be given, maybe a handbook should be made. Here is a slightly humorous but almost necessary collection of tips from me to you- the unsuspecting Portland Tri-met passenger.

These little tips may or may not help you preserve your innocence and/or bodily wellness. When in Portland do as the Portlanders do; this is weird inconsiderate shit very artistically. We have our own culture here. When exiting the Trimet experience on wheels, please exit to the rear. Thank you.

The Coronavirus Is Causing Chaos During Finals Season at L.A.’s Universities

Video: Calling the Corners with L.A.’s Witches at Coven Weekend

Oregon Cannabis: Someone Might Want to Challenge this Vape Ban